There’s another virus destroying the planet – its name is misinformation. Due to an unmitigated, rampant spread, a new variant has developed, too, called truthiness.

You’ve come into contact with its symptoms; hopefully, you’re not infected…
– Information spreads virally; we’ve even got a term for it – a video, image, or story went viral – and while this is how stories got around for centuries, by word-of-mouth, the Internet and social media have accelerated this word-of-mouth spreading to a point where it’s moving too fast.

This is hurting our world – from Covid-19 anti-vax sentiment and the denial of an impending climate crisis to the incitement of insurrection because of a little troll called Q.

Let’s face it, you’ve probably shared misinformation, not intentionally, mind you, but because it appeals to your biases or you simply found the headline interesting and/or triggering and didn’t bother to read the article.

Our actions have consequences, however, and with misinformation or truthiness (the concept that something’s true because you feel it is) these can be quite extensive.

We simply don’t know how to read visually anymore – what does misinformation look like? Do you know? This is an immediate artistic problem.

Through several visual and performative experiments, Liz Dom’s work aims to discern not only the phenomena of misinformation but how it happens.

By involving the public in the making, she asks them to discover the how with her and to become conscious of their decisions using a learn-by-doing approach.

Liz Dom´s work confronts the audience with the very stuff of misinformation – information – through a variety of media; from news to social media, games to documentary, and asks them to make decisions based on how they’re reading it. This active questioning reveals the how – from cognitive bias and ideology to a slew of small, seemingly minor influences that lead to sharing or believing something false.

In a performative round table, called Viral Load, at Adressaparken, May 20, 4 PM, Liz Dom will interview a journalist from Addressavisa newspaper and the Norwegian public about fake news and misinformation. She will pose as a journalist, truther and fortune-teller, mixing fact and fiction in a surreal, absurd demonstration of the skewed stories we tell about our world.

The title, Viral Load, speaks towards the total of alternative facts, half truths and misinformation contained within a message and its probability of being highly contagious.

As ecophiles, it is our responsibility to be good ancestors to future generations; 2050 is just shy of 30 years from now.

Misinformation and its symptoms can be cured if we treat the root cause – a growing visual illiteracy and an over-reliance on truthiness.

Sure, we don’t share the same facts, and, therefore, not the same reality, but perhaps we can get closer to sharing the same truths, at least.

Performances
Nils Aas Kunstverksted, May 15 @ 13:00 – 15:00
Adressaparken, May 20 @ 16:00 – 17:00
Viral Load: An Interview with the public. A performative round table by Liz Dom in collaboration with artists Joshua Dekia and Malakias Liebmann. 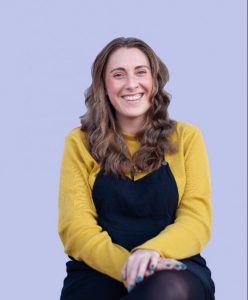 Liz Dom
Liz Dom is an interdisciplinary artist from Johannesburg, South Africa. She completed her Bachelor of Visual Arts (BVA) at University of South Africa (UNISA) in 2016, being awarded the Certificate of Excellence in the Field of Fine Arts for her final exhibition WOLD. Dom is non-insistent about a specific practice or medium, preferring to be recognised for her emergent, experimental approach, allowing thematic concepts to guide her visual research and arising narratives.