My cousin claims to have had a relationship with a female dolphin for several years on the Sunshine Coast of Queensland, Australia. Then a friend of a friend was a screenwriter for a popular teen, oceanic, drama series which involved research at Seaworld about dolphins and, of course, their very active sex lives. Apparently there is a reason why tourists must wear a wetsuit while swimming with dolphins… Then a friend of mine that took a lot of hallucinogens claimed to see aliens transforming into a pod of dolphins at Byron Bay that later tried to seduce him. 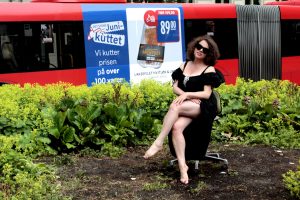 Kirsty Kross is an Oslo based artist originally from Brisbane, Australia. Her work focuses largely on humans’ relationship to the attention economy and growing ecological uncertainty. She holds a Bachelor’s Degree in Art History from the University of Queensland and a Masters Degree of Art in Context from the Berlin University of the Arts. Kirsty Kross has exhibited and performed at Bergen Assembly, Høstutstillingen, KUBE og Jugendstilsenteret, Tenthaus and PINK CUBE as well as Clockwork Gallery, Parkhaus Projects and Galerie Crystal Ball in Berlin. She will perform at “Jeg kaller det Kunst”- the opening exhibition of the Norwegian National Museum in 2022.