In an overgrown post-apocalyptic landscape, a cautious figure explores broken detritus, lost media, and memory fragments from the ruins of a familiar civilization. Small sounds, tones, and videos gently flicker and glitch to life among the giant mobile phone tombstones and scattered clusters of dead screens and tablets.

A fragile tonality appears in the unstable memories. A shadow of melody takes shape. From a future mirror echoes the music of everything we lost.

Sonotopia – A Memory of Shadows is an audiovisual real-time live performance and installation. It investigates the atmosphere, sound, and musicality of extinction. The work explores vast ruins and specific memories, in the scope from singular phenomena currently under threat of extinction or abandonment, all the way up to civilizational collapse.

The post-apocalyptic ruin as our beloved monster
Every era has its monsters, springing from our collective subconscious. Monsters are our hive fantasy of punishment for contemporary anxiety, a symbolic cultural threat communicated through myths and stories. We called them gods for a long time. Now they are the biggest slice of the CGI budget. The 50ies had their atomic ants and teenage mutants, the 60ies and 70ies alien encounters. The 80ies and 90ies gave us amok networks and cybernetic lawnmowers.

What is our contemporary monster? We have the post-apocalypse. We knowingly destroy our world. Our anxiety shaped into myth is the planet hitting back at us.

The ruins, the deserted cities, the abandoned and overgrown suburbia where we scavenge for mundane nostalgia amongst the weeds – this is the biggest trope of the last two decades. Sometimes there are zombies roaming, sometimes robots patrolling, sometimes MacGyverish conflict over scavenged resources… it doesn’t really matter what IS there. Ultimately what is most important in these fairytales, is that which is already gone.

To remember shadows
We are in the era of accelerating change. The annihilation of the past is always inching closer to the present, possibly brought upon us by climate crisis in the physical world and attention-devouring algorithms in the digital. How can we notice everything that disappear when disappearance is exponentially increasing?

What is their song? What is the music of all we abandon? 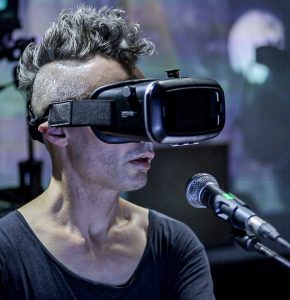 Gisle Martens Meyer, born 1975, is a Norwegian composer, media-artist, and electronic music producer. His work centers on ” escapism in dystopian futures”. He has created award-winning media-art performances for European festivals for art and media, toured internationally with his electronic music acts, and been commissioned to score productions from independent contemporary dance to hit TV shows and blockbuster videogames.

Martens Meyer create large, visually epic spectacles, investigating digital culture, media, and technology. The works can seem colossal, but the core details are sourced from the smallest things: The disregarded, the abandoned, the forgotten. Whether it is samples from obscure vinyl LPs, pirated videoclips from late night cable sci-fi movies, or field-recording moss and lichen in suburban wastelands, his works always have a tender and loving relationship with the ignored and forgotten – remembrance and recognition through salvage.

His main work is the music artist “Ugress”, a sci-fi inspired sample-based electronica project that regularly tours European clubs and theatres. The project has released multiple gold-selling albums and is frequently licensed to films and television. The cinematic tone and real-time aspect of his production has led to commissions for film and videogame scoring, as well as film concerts. Martens Meyer has created new music to a series of silent film classics, performed live with ensembles in European cinemas.

His most recent media works include “Atrophy In The Key Of Dreaming Books” (2019), an audiovisual book-symphony investigating the rift between analogue and digital information and knowledge, “There Is No Here, Here” (2017) a hyper-pop music video performance exploring the hollowness of social media and “The Bow Corpse” (2015), an orchestra work recreating clones of the orchestra from their discarded “trash” sounds amassed in swarm formations to explore privacy, surveillance and big data.