Goatman: How I tried and failed to take a holiday from being human

A few years ago I tried to turn myself into a goat, so I could have a holiday from being human. This was a fairly protracted process, as you might imagine. Over the course of about a year I enlisted the help of doctors of prosthetics, rumen biologists, evolutionary anatomists, neuroscientists, ethologists, a shaman and a goatherd. Each of these experts, when asked what the difference between Us and Goats is, could point to various greater or lesser differences, except the shaman, who maintained that at heart, there is no ultimate difference between us.

In my talk I’ll tell the story of this ‘hero’s journey’ and discuss the underlying method: the pursuit of an impossible goal as beacon by which to navigate through vast cross-disciplinary territories, as storytelling device, and means by which to force a move from theory to an engagement with (the often inconvenient) practical aspects of implementation.

I will also describe my current project: to make a totally harmless car, not just harmless in all senses for human persons, but for non-human persons too. Again this is an impossible goal, the practical implementation of which will force a reckoning with the reality with de-anthropocentric design.

Goatman began as a project to take a holiday from being human; to escape the stress and worry of being a person in human society with all its moral and practical complexities. There is a lot to worry about personally and globally, and with worry comes guilt and regret for failing to do ‘the right thing’. So: wouldn’t it be nice to just trot away from it all and become a goat, free to roam, free from worry, free from guilt? To have a holiday not only from your day-to-day life, but from your self as well?

But underlying the project is a question about ‘progress’: the notion that our species and our civilization is progressing toward something better: our spinning of stories out of our pasts and our futures, our regrets and our hopes.

I found trying to become a lowly, humble goat spiritually (as well as physically) uncomfortable: was I trying to go ‘backwards’, to de-volve? This discomfort led me to realise, that although I don’t consider myself religious, I’d been swept up/indoctrinated in a secular grand narrative; that there is a hierarchy of species, and that despite a few setbacks along the way, a rationalist liberal high technology culture will ultimately emerge as the end of our history. The techno-optimist idea that we as a species are progressing and evolving away from our base, savage uncultured ancestors, and toward an enlightened post-human future, possibly even colonising other planets.

Ernest Becker in the Denial of Death (1973), stated that currently ‘we are gods with anuses’: we’re high-tech cyborgs able to transcend so much of our biology, but yet we still must succumb to our biology, eating and defecting, and ultimately will die and rot away. Becker argued it is cognitive dissonance arising from this dual view of ourselves, that drives our need to be part of grand narratives, be they religious, nationalistic, aristocratic, or techno-scientific. We can’t quite face our knowledge of our own mortality, so we need to latch on to the idea we’re part of something greater.

The post-human answer to resolving this dissonance is to continue developing technology which will ultimately allow us to sever our link with our mortal fleshy biology, curing old age and death, and thus become fully god-like (and in the case of ‘mind-uploading’ to literally relieve ourselves from the necessity of having an anus).

As I pursued my dream of becoming a goat I realised I’d soaked in this optimistic vision of the future growing up, and at least subconsciously believed I was contributing in some small way to progressing human civilisation toward some kind of Star Trek future. And so Goatman became about enacting an alternative route out of our dissonance; to remove the godlike part in us. I wanted to personally come to terms with the idea that there is no ‘human destiny’ that we are all a part of, to stop thinking about ‘the future’ as a kind of destination, to stop striving, to remove humanity from the top of some imaginary hierarchy of nature, to expunge Descartes, and to present an alternative humble future of the post-human to aim for: the life of a goat on a hillside. 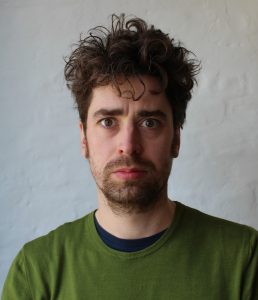 Thomas Thwaites is a designer interested in the social impacts of science and technology. He holds an MA in Design Interactions from the Royal College of Art, and a BSc. in Human Sciences from University College, London.

His work is in the permanent collections of the Victoria & Albert Museum in London, the Banque De France (Cite de l’Economie in Paris), and the Asia Culture Centre in South Korea. His work is exhibited at major galleries and museums worldwide, including at the National Museum of China, the Museum of Modern and Contemporary Art in Seoul, the Science Museum (London), the Cooper Hewitt in the USA and La Triennale di Milano (Italy). He has spoken at numerous conferences, including TED and Design Indaba, as well as at universities and businesses worldwide. Press includes features in national newspapers including the New York Times, Süddeutsche and The Financial Times. He has presented a four part television series, aired on Discovery Channel.

He is the author of two books; The Toaster Project, and GoatMan. The Toaster Project documents Thwaites’ attempt to make an electric toaster from scratch. Goatman describes his project to take a holiday from being human by becoming a goat. Both are published by Princeton Architectural Press, and have been translated into Korean, Japanese and Norwegian.