We will visit a couple of crash sites: where bodies (human and non) collide with rapidly evolving techno-ecosystems. To find our way through, we immerse ourselves in their sensory conditions. To listen with all of our human-ish+ senses.

If collision is understood as a form of disturbance (in the ecological sense), then in disturbance we find not only damage, but also the opportunity for renewal. As we collide in new and ancient ways, we (a multi-species we) discover, over and over again, as the great poet Fred Moten said, “a shared need to renew our habits of assembly.” A journey through three sites of sensorial collisions; sites of assembly; and sites of varying degrees of hopeful renewal.

Interspecies Robot Sex – in response to the dissapearance of bees from industrial agriculture due to collony collapse disorder, human laborers take over the insemination of pear flowers while robotocists innovate biologically-inspired micro-drones called ‘Robobees.’

Transhumanist Cephalopod Evolution – a psycho-physical training regimen for human enhancement, with the cephalopod as our role model species. Discarding with   transhumanist visions of melding “man and machine,” we dedicate practice instead of capital towards evolving human enhancement, feeling towards our fellow species and oceanic roots while positing the “model species” as role model rather than exploited instrument for science, and embracing the capacities residing in existing human(-ish+) bioavailabilities. How can we know what technology we need to add on, if we don’t yet know what’s possible with what we already have? What happens when we take up Flusser’s molluskian position? And what in the hell are we going to do with all these futures?

And finally Contact Zone – a wild meander through the macro and micro-ecological scale of rewilding: Swiss alpine landscapes through the introduction of eastern european lynx, and my microbiome through introduction of Lactobacillus bacteria cultivated with the aid of a central american cactus. Both involve a re-calibration of the ways we use science and technology to interface with the non-human world (“the controlled de-control of ecological control,” as Jamie Lorimer writes). “Rewilding” attempts to de-center the human, while using both neoliberal and resistance logics to attempt to engineer new stable resilient ecologies. On our way there, a vast surveillance apparatus – aided by genetic sequencing and machine learning – is put in place to monitor, track, model, and manage these wild organisms and their systemic interactions. How can embodied sensing and remote sensing interface in new ways? 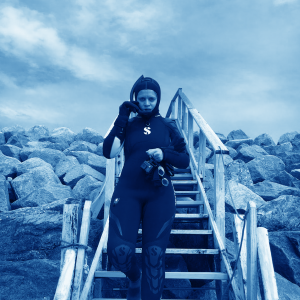 Miriam Simun works where bodies (human and non) collide with rapidly evolving techno-ecosystems. Trained as a sociologist, Simun spends time in communities of experts from biomedical engineers to breastfeeding mothers to farm laborers to freedivers. Taking on the role of ‘artist-as-fieldworker,’ the process is lived, embodied and complicated. Spanning multiple formats, Simun’s works include video, installation, performance, writing, and communal sensorial experiences, always forefronting corporeal and embodied ways of listening, knowing, and being.

Header Graphics: “Your Urge to Breathe is a Lie” by Miriam Simun. Video still.