Beyond Human Perception (2020) is a video installation that allows the audience to visualise and compare the reactions of humans and plants to a common stimulus; live music. Erasing boundaries into the communication and understanding between both living beings and by highlighting  the immediate reactions of plants to their surrounding changes.

The installation is the result of several sessions where the brain activity of humans was measured, through the EEG registered wave,  and measuring  the electrical oscillations that are happening into the plants, measured with a sensor developed by the artists, able to detect immediate changes in plants.

Through the use of mathematics, by using the Fast Fourier Transform, humans data and plants data can be compared to each other. This data can also be displayed graphically thanks to an algorithm developed by the artists that allows the audience to see the data through the shape of little spheres that are moving within the geometric shape of a torus. Each little sphere represents each data registered. The graphic representation of  human data and plant data can be seen simultaneously in a video allowing the audience to find patterns by comparing the both living beings’ reactions to the live music.

The installation is composed of two synchronised videos. One video with the concert for plants and humans, and the other one with the data visualisation of two living beings’ responses during the performance.

The work was realised within the framework of the European Media Art Platforms EMARE program at KONTEJNER | bureau of contemporary art praxis with support of the Creative Europe Culture Programme of the European Union. 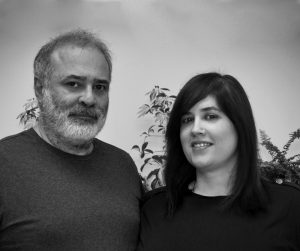 María Castellanos and Alberto Valverde (uh513) began working together as a duo in 2009.  María Castellanos is an artist and researcher working at the intersection of art, science, technology and society. Currently she is postdoctoral researcher at Oslo Metropolitan University, in the framework of FeLT Project – Futures of Living Technologies.

Alberto Valverde is an artist and technologist with experience in system design, creation of interactive environments, multimedia and robotics. He worked as associate professor at the Faculty of Fine Arts of the University of Vigo (ES).

Their joint practice focuses on the relationships between human beings and machines, and in recent years they have centred their research on the sensory boundaries and the creation of complex systems that promote the communication and the understanding between humans and non human beings.

Their work has won awards like VERTIGO STARTS (2017), a prize granted under the aegis of EU-Horizon 2020, an initiative led by Centre Pompidou and IRCAM , Paris, and the Fraunhifer. Gesellschaft, Germany, to foster collaboration between art practitioners and R&D projects. In 2016 they were awarded the Antón Scholarship for Sculpture Research from the Museo Antón in Candás (Asturias). Also in 2016 they were nominated for the STARTSPrize’ 16 at Ars Electronica, Linz (Austria) and the Japan Media Arts Festival, Tokyo (Japan).