In the piece Birdsong Leena Saarinen aims to bring the languages of people and birds closer to each other by creating an alphabet for birdsong. For the piece she has studied sound visualization through spectrograms. While studying bird vocalizations she found that the whistle tones in the spectrograms look visually similar to letters or alphabets. That is one of the links Saarinen tries to make in order to bring the human and nonhuman languages closer to each other. She looks for connections and similarities between the languages in order to dismantle their structures and hierarchies. She is also interested in different kinds of translations between image, sound and text and what knowledge can be gained and lost in the translation process. 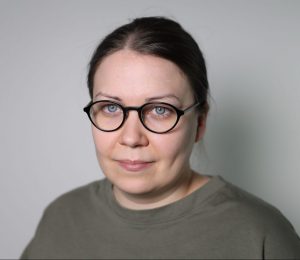 Leena Saarinen (b. 1988) is a visual artist based in Helsinki, Finland. Her practice is multidisciplinary and research based. She works with questions of posthumanism in the age of climate change and mass extinctions. In her work she studies culture, language and the relationship between human and non-human species. Her works have been exhibited in galleries, museums and public spaces in Finland and internationally. She is currently doing her master’s degree in the Academy of Fine Arts in University of the Arts Helsinki in the sculpture department.