RE-ANIMATED explores the intersections of extinction, preservation of immortality. It is a re-imagining of ornithologist Douglas H. Pratt’s memories of the now extinct Kaua’i ʻōʻō bird, as told to Artist Jakob Kudsk Steensen. In the work, a vast virtual landscape based on Kaua’i unfolds and transforms into a photorealistic new world for people to explore. 3D-scanned organic material sourced from both field work and the American Museum of Natural History, as well as real archival audio are all remixed together, alongside algorithmic music composed by Michael Riesman, Musical Director for the Philip Glass Ensemble. Plants, moss, and insects respond to the pulse of music generated in real-time, and the audience’s breath and voice organically impact the virtual atmosphere through the VR headset. As a slow-moving, poetic virtual environment, RE-ANIMATED investigates how we relate to nature irrevocably altered by human activity. It provokes fresh perspectives on our ecological future, which may become unbound by the physical conditions governing our present reality.

RE-ANIMATED, Arrival
RE-ANIMATED, Arrival begins with a descent upon the virtual simulation of the island of Kauai and the Alakai plateau. The viewer travels through time, onto the 5 billion year old volcanic island. It is a slow, meditative fall through layers of clouds, humidity, clouds and finally landing on the misty, humid atmosphere of the plateau’s jungle forest, the home of the Kaua’i ʻōʻō bird, before it went extinct during the 1980s because of avian malaria.

The Arrival is a layered story of explorers, missionaries and naturalists, also of the birds, the mosquitos and a virus, avian malaria, interacting with the landscape, through time. Between the 18th, 19th and 20th century, as the elevation drops slowly, the viewer experiences the impact the species have on the island, on each other over the years, changing the land and the life in permanent and ephemeral ways.

RE-ANIMATED, Mating Call
RE-ANIMATED, Mating Call is based on the last Kaua’i ʻōʻō bird, which died in 1987, marking the extinction of its species. In 2009 its mating call – first recorded in 1975 and later digitized in an ornithology lab in New York – was uploaded to YouTube. Since then, the song of the Kaua’i ʻōʻō calling in vain to a mate who was not there has been played more than half a million times. The project is a response to this mating call.

RE-ANIMATED, The Bug Zapper
RE-ANIMATED, The Bug Zapper, begins with a sensory and immersive journey through the foliage of the island, moving through leaves, water and roots. Through a hypnotic light, the space transforms into a virtual exhibition with flies covering the walls. These flies turn slowly into letters, warning us of the self-reflective nature of peace – we are drawn by digital media to consume these stories of extinction, just as the flies are drawn by the bug zapper into their own doom. 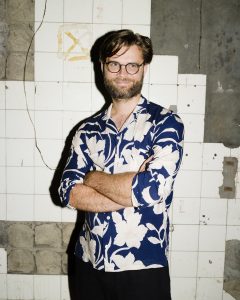 Jakob has recently exhibited with his major solo exhibition Berl-Berl in Berlin at Halle am Berghain, commissioned by LAS, and at Luma Arles with Liminal Lands for the Prelude exhibition. He was a finalist for the Future Generation Art Prize at the 2019 Venice Biennale. He received the Serpentine Augmented Architecture commission in 2019 to create his work The Deep Listener with Google Arts and Culture. He is the recipient of the best VR graphics for RE-ANIMATED (2019) at the Cinequest Festival for Technology and Cinema, the Prix du Jury (2019) at Les Rencontres Arles, the Webby Award – People’s Choice VR (2018), and the Games for Change Award – Most Innovative (2018) among others.