Science fiction erupted into the historical present in 2018, when Dr. Jiankui He created the world’s first genetically modified babies with CRISPR-Cas9. The aim of the experiment was to engineer resistance to the HIV virus. Popular fiction about mutants—from the X Men and Octavia Butler’s Xenogenesis to more obscure sources like Larissa Lai’s Salt Fish Girl—offers uncanny diffractions of possible posthuman futures. Biotechnologists are experimenting with a diverse array of trans-genes, that could offer us more-than-human abilities. Queer and impure hopes are driving experimental agendas forward. We are becoming other in our technophilia—beside ourselves with dissolution and glee.

A riotous diversity of new life forms are simultaneously emerging in laboratories. Experimental animals are becoming human, so that they might serve as better models of our bodies, our minds, and our selves. Genetically modified organisms are running wild, generating emergent ecological communities. As we expand the purview of our ecophilia, is there room for these rogues and mutants too?

We live in multispecies worlds that are fragile, needy of care. As we negotiate new conditions of life on a damaged planet, it is important to recognize that many of us are wounded too. We are mutants. Shared chemical exposures makes us kin with a multitude of queer and crip animals, plants, and microbes whose lives have been irrevocably altered.

Capitalism, environmental racism, militarism, and plantation systems continue to displace peoples and endangered creatures who previously enjoyed health and well being on their own lands. Life is becoming non-life on a planetary scale. We live in an era of mass extinction. New adversarial political and coalitional movements are needed, as existing approaches to politics fail to address the scale and the scope of the problems. It is time to take our biopolitical tactics to the next level. It is time to reinvigorate practices of interspecies care, while also remembering how to live, love, and fight. 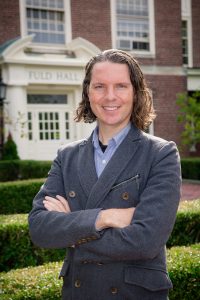 Eben Kirksey is an American anthropologist who writes about science and justice.  He is best known for his pioneering work in multispecies ethnography—an approach to studying human interactions with animals, plants, fungi, and microbes. Eben has an insatiable curiosity about nature and culture. Investigating some of the most important stories of our time—related to biotechnology, the environment, and social justice—led him to Asia, the Pacific, and the Americas. When controversy broke about the world’s first genetically modified babies, Eben spoke about ethics from the main stage of the International Summit on Human Genome Editing in Hong Kong. Later, he travelled to mainland China where he learned about the queer hopes and impure desires that animated this experiment with CRISPR-Cas9.

Eben attended the University of Oxford as a British Marshall Scholar and earned his Ph.D. from the University of California at Santa Cruz. He has taught at some of the most renowned and innovative higher education institutions, like Princeton University and Deep Springs College, in the High Sierra desert of California. He has helped curate a number of art exhibits, including The Multispecies Salon which travelled from San Francisco (2008) to New Orleans (2010), before settling in New York City. Duke University Press published his first two books—Freedom in Entangled Worlds (2012) and Emergent Ecologies (2015)—as well as an edited collection with the findings from The Multispecies Salon (2014). The Institute for Advanced Study in Princeton, New Jersey, hosted Kirksey for the 2019-2020 academic year, where he finished his latest book: The Mutant Project.

Currently he is Associate Professor (Research) at Alfred Deakin Institute in Melbourne, Australia, where he is studying The Promise of Multispecies Justice, the chemical turn in the humanities, and the circulation of viruses in multispecies worlds.

Header Graphics: China’s GeneBank aims to bring endangered species back from the grave.