CECILIE B. JORDHEIM [no]
DADA MANIFESTO

The gramophone record, the musical thought, the score, the waves of sound, all stand to one another in that pictorial internal relation, which holds between language and the world. To all of them the logical structure is common. (Wittgenstein, 1999: 32) 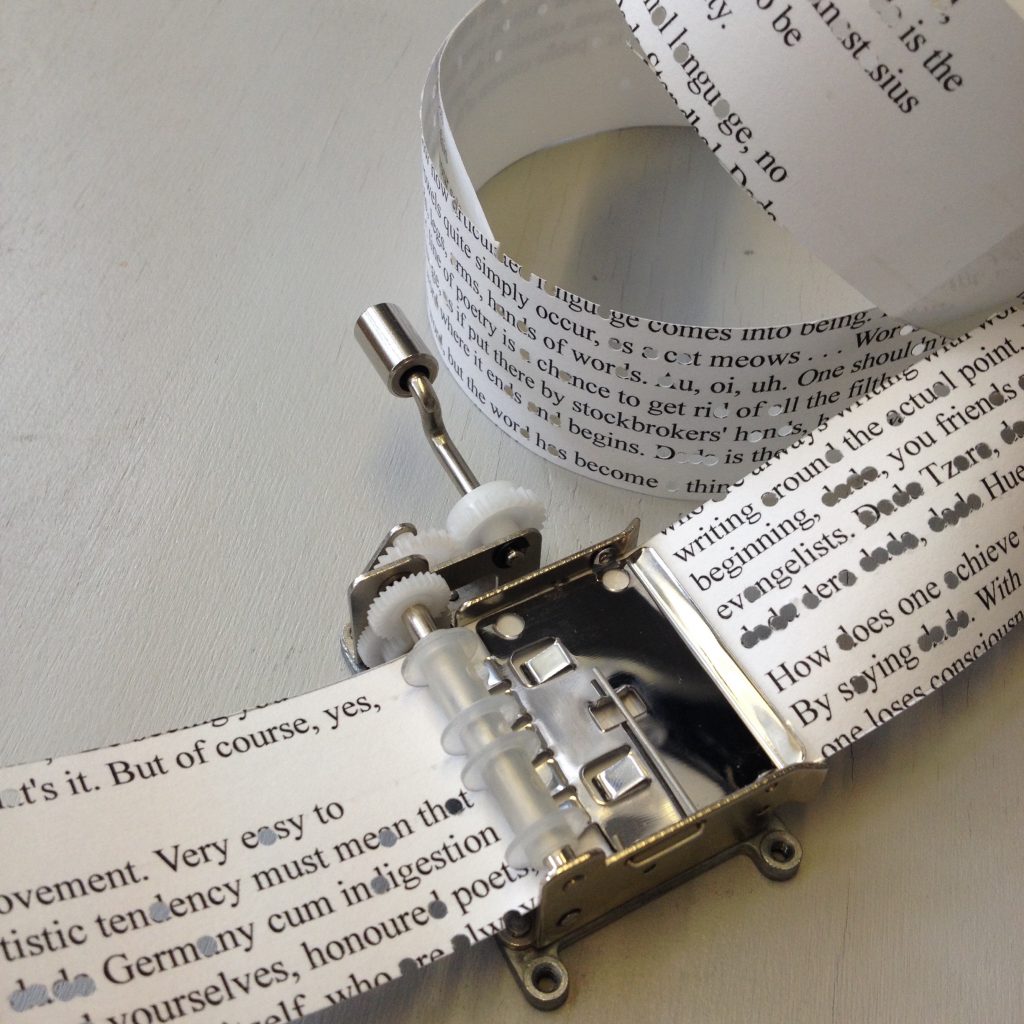 Dada Manifesto (2015) is a sound piece for music boxes of 8 dada manifesto from the period 1916 to 1921 by Hugo Ball, Tristan Tzara, Francis Picabia, Raoul Hausmann and others. The manifesto, the text, on one or several A4-pages, is cut into one long strip to fit a music box and then spliced with tape. The letters D and A in the text are then punctuated, so the absence of D and A (..DADA), is what you hear being played.
During Meta.Morf, the Dada Manifesto will be shown in an expanded form at Art Museum Nord- Trøndelag: In addition to the soundwork of the Dadaists manifesto from the early 1900s, they will, after a 100 years, be in the company of soundwork and a performance produced in col- laboration with students from music, dance and drama at Olav Duun High School, Namsos.

Manifesting is about making something clear or obvious; forming a manifesto is about making visible and public what is important to oneself.
Dada was the first conceptual art movement where artists did not create aesthetically pleasing objects. The manifestos that originated in the Dada movement challenged bourgeois conven- tions and posed, and generated, challenging questions about society, the artist’s role and the meaning of the art.

The first dada manifesto by Hugo Ball, from 1916, encourages poets to stop writing with words, but rather write the word itself. Ball states that “I shall be reading poems that are meant to dispense with conventional language, no less, and to have done with it”. In this way, the collection of Dada manifestos in Dada Manifesto (2015) acts in accordance with Ball’s manifesto, using the word construct as the direct source.

Dadaist and artist Hans Arp wanted to incorpo- rate chance operations into the creation of art, in opposition to traditional art production where a work is carefully planned and completed. The introduction of coincidences was a way for Dadaists to challenge artistic norms and to ques- tion the artist’s role in the artistic process.

Just like the Dada movement emerged as a reac- tion to World War I, we see an anti-authoritarian wave across the world today questioning current norms and conventions. In particular, we see this in the younger generation in issues related to sustainability and climate change.

Students are invited to participate to the conver- sation with issues, big or small, that concerns them, and to communicate their views. The students’ statements then becomes a composi- tion, manifested on the paper strips to be played by the music boxes. The composition will provide the basis for an interpretation from the dance students, while the performance structure is based on chance operations.

The manifests from the High School students will be displayed as part of the exhibition, together with the original Dada Manifesto (2015) and the art pieces from the Kids’ Art Workshop that takes place Saturday, March 7.

The audience is also invited to participate actively and contribute to the exhibition by making their own compositions on paper strips to be included in the exhibition. This closeness to the audience and the participation of the spectator is pervasive in the art of Cecilie Bjørgås Jordheim, as well as highlighting relevant social issues. 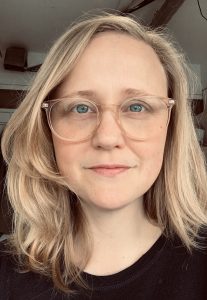 Cecilie Bjørgås Jordheim (b. 1981 in Bergen, Norway) is a visual artist, conceptu- al poet and composer currently working with the translation between visual and auditive systems, concrete poetry and the concept of isomorphia.

Through installations, visual scores and concrete poetry, Jordheim’s work springs from an inter- disiplinary agenda; between genres, fields of art and medium, and the thesis that all visual has sound. Jordheim thematizes the human need for systematization and questions if there a direct connection between language and the world; topography, typography, text, architecture and sound/music. The scores are often frame work for a collaboration with musicians, where the outcome is in the translation between the visual and the musical improvisation.