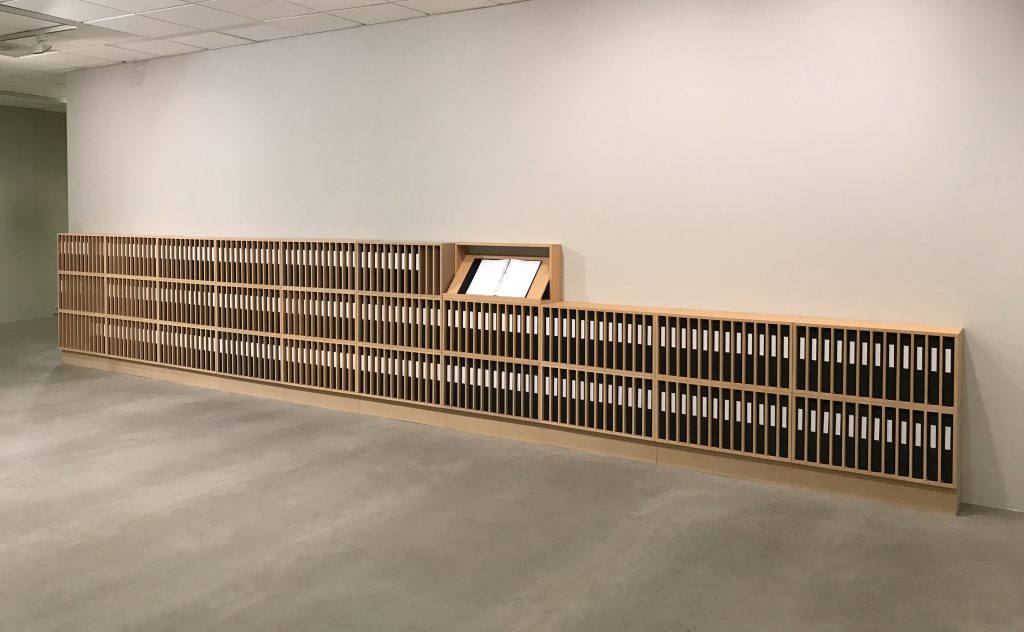 In the exhibition ”punkt.kontinuum” (point.continuum) at Trøndelag Centre for Contemporary Art the Norwegian conceptual artist Annika Borg presents her lifework “one and one hundred dice rolls a day” – a project that has spanned the course of 25 years. It began in September 1994, while Borg was a student at the art academy, and for the past two and a half decades she has rolled a set of six dice simultaneously, 101 times every day.

The dice is a small object that represents coincidence by generating random numbers. This element of chance is combined with a specific set of rules. Borg has, like most conceptual artists in the 1960s, outlined a fixed instruction for how the project is to be carried out: “Every day a set of six dice are rolled. Once each morning, followed by one hundred times later the same day. For every dice roll the combination of numbers is written down. Every dice is marked and has its fixed place in the order.” The numerical combinations that unfolds are gathered in a steadily growing archive: one post a day, one bound volume a month, one section of a shelf per year. The exhibition presents what with time has become a large installation of this material.

Inspired by the eye of the dice, the dot became the first shape that the material was translated into. The dot usually marks a conclusion, often at the end of an sentence, but in this case it also marks a continuation: When a set of six dice are rolled one hundred and one times the possible outcome of combinations are almost endless – mathematically the project would generate 46.656 unique variations of the first dice roll as a singular throw. The number of unique variations of the next hundred throws as a group is in comparison higher than the number of grains of sand on earth and higher that the number of stars in the universe. Borg engages in dialogue with these random numbers, with different sets of forms and rules, and this simple yet complex visual language has shown to be capable of bringing life into the abstract numerical material. This way of constructing and transforming numbers aims to make us reflect upon coincidences and systems, time, extent and variation, which are active elements in all forms of nature.

In addition to the dot, Borg’s visual language has so far taken the shape of straight lines, wavelines and semicircles; all represented in this exhibition. To accurately preserve the distinctiveness of the material she uses a digital working method in the processes of translating the numbers. Although the finished work does not always end up in a digital form, her sketches are always carried out digitally. Most of the time, there is no programming involved, but a manual placement of elements in a vector based program according to the numbers from the dice – a process Borg herself calls digital handicraft. This method gives her ample time to get to know her material in a very close and specific manner and create artworks that presents the uniqueness of the numeric material.

Through drawing, animation, sculpture and sound, Borg presents different approaches to explore the inherent nature of this unique and random material. With a scientific approach she has dived into the world of numbers and randomness. She has gathered data, made observations, and undergone precise experiences. Through this process she has steadily developed a stronger feeling for and understanding of the uniqueness of her material and what is latent in it. At the same time her method also resembles an extended performance in which dedication, ritual, and duration come into play. The fascination for the project and numbers are connected to time and a commitment to art – because it provides meaning, if not in the form of language then in the shape of experience.

The chosen title for the exhibition indicates that reaching 25 years of the project is only a point in a continuing journey heading for an infinite future. Given the project’s duration and immersion, her approach can almost be seen as an alternative model for science and other processes in the unfolding of society: she shows us that long-term perspectives are in fact possible. 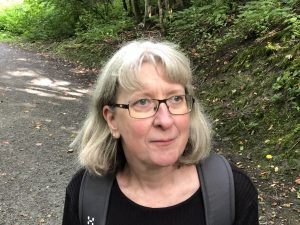 Annika Borg (b. 1964, Stockholm) is a visual artist based in Trondheim. She graduated from Trondheim Academy of Fine Art in 1996. Her key method of work is process based and places itself within a conceptual framework with a methodology consisting of action, collection, transformation and visualization. Her artistic material is numbers collected from the action of rolling a set of six dice every day. This has gradually become a large body of numeric material, which in turn has resulted in several sub-projects where the numbers are transformed into various visual forms and expressions.

Throughout the last three decades she has participated in several group exhibitions and her work is included in public art collections. Trondheim Kunstmuseum presented her solo exhibition “Circle Incidents” in 2012. Borg has played an active role in the local arts community through numerous positions and was a founding member of the artist run space trans-art (2000–2003). She has received multiple public art commissions in educational buildings as well as an outdoor project in Ravelsveita in the centre of Trondheim. In 2016–2018 Borg was a resident at Tempe studios in Trondheim. In the fall of 2019 she presented the first edition of the “punkt.kontinuum” (point.continuum) at North Norwegian Art Centre at Svolvær as a celebration of the project’s 25th anniversary.

Photos courtesy of the artist.