Random Access Memory is a fully functional digital memory. Instead of operating on semiconducting components to represent either the binary states of 0 (zero) or 1 (one), the memory uses grains of sand as storage material. Sand grains can be read, placed or removed on a rotating disc by a three axis pick and place mechanism combined with a microscope camera to track the position of a single sand grain. This memory mechanism is prone to errors thru misreadings, bouncing grains and other imponderabilities.

Furthermore the machines performs a computational process on this memory. The algorithm, executed on the sand grains, is a so called Turmite, a two dimensional operating Turing Machine. It’s only goal it is to write as many 1’s (stones) as possible in the memory and to avoid a termination, following a strict rule. This process emerges complex and repetitive pattern on the disc. R A M investigates the contrast of a “pure” mathematical process (algorithm) and its “impure” material implementation into the world.

Random Access Memory reflects on the interaction of idea and matter and their encounter in contemporary information technology. It forms some kind of hybrid between contemporary and an ancient technology. Computing with sand, Geomancy or ‛ilm al-raml (science of the sand) is an old arabic divination technique based on sand grains, or other geological material, that were “casted” on a plane surface. A strict set of rules, recursively applied on the grains get condensed in order to gain knowledge about the future. Nowadays boolean algebra is inscribed into thin layers of purified silicon, another geological material, in order to execute complex simulations like weather prediction on it. 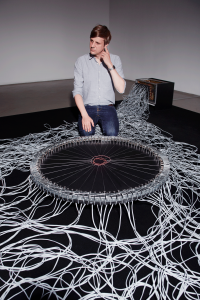 Ralf Baecker (b. 1977 Düseseldorf, Germany) is an artist working at the interface of art, science and technology. Through installations and machines, Baecker explores fundamental mechanisms of new media and technologies. In his representations and specializations of digital and technological processes he offers a poetic sight behind the surfaces of contemporary image making. At the core of his objects lies the entanglement of the virtual with the real, or rather, with the world. With a media-archaeological outlook, Ralf Baecker digs within obsolete devices for traces and functions that are still detectable in technologies today. His work seeks to form a hybrid between contemporary digital methodologies and a material oriented artistic practice. As a result, he understands technology not as a tool but rather as an epistemological instrument, in order to pose elemental questions about a world perceived through technological impressions.

Baecker has been awarded multiple prizes and grants for his artistic work, including the grand prize of the Japan Media Art Festival in 2017, an honorary mention at the Prix Ars Electronica in 2012 and 2014, the second prize at the VIDA 14.0 Art & Artificial Life Award in Madrid, a working grand of the Stiftung Kunstfond Bonn, the Stiftung Niedersachsen work stipend for Media Art 2010 and the stipend of the Graduate School for the Arts from the University of the Arts in Berlin and the Einstein Foundation.

His work has been presented in international festivals and exhibitions, such as the International Triennial of New Media Art 2014 in Beijing, Künstlerhaus Wien, ZKM | Center for Art and New Media in Karlsruhe, Martin-Gropius-Bau in Berlin, WINZAVOD Center for Contemporary Art in Moscow, Laboral Centro de Arte in Gijon, Centre de Cultura Contemporània de Barcelona (CCCB), NTT InterCommunication Center in Tokyo, Kasseler Kunstverein and Malmö Konsthall.
Since 2016 he teaches at the University of the Arts Bremen as Professor for Experimental Design of New Technologies in the Digital Media program.