THE FIRST EIGHT (2016)
Multi-channel audio piece made on commission by INA-GRM which premiered at the PRESENCES électronique festival in Paris, 2016. The sound sources in this piece are mostly acoustic, including voice (Stine Janvin Motland), tuba (Martin Taxt), acoustic guitar (Håvard Skaset), double bass (Guro Moe) and percussion (Jaboc Felix Huele), but the source material has been edited and structured in such a way that sounds more like the electronic noise music Marhaug is known for.

DEATH OF THE NOISE ARTIST (2018)
Multi-channel audio piece made on commission by Tectonics Festival, Glasgow in 2018. This is a 23 minute work that was made during a two year period in Nordland, above the arctic circle in the north of Norway, where Marhaug investigated the environment and surroundings in which he grew up, trying to find paralells in the landscape and his electronic noise music. The piece is a mixture of location recordings made during winter, and electronics inspired by the harsh arctic climate. 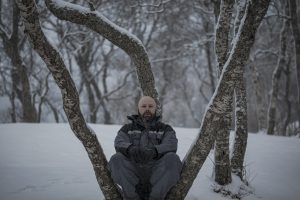